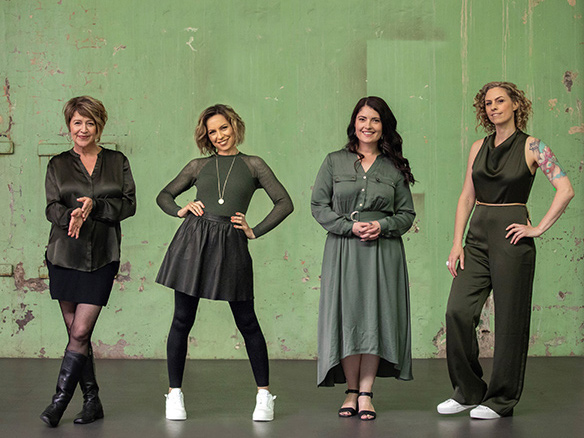 Described as ‘a national treasure’ (Herald Sun), Coco’s Lunch have made an indelible imprint on the contemporary vocal music landscape and are dedicated to the creation of soul-enriching music.

Coco’s Lunch are pioneers in the composition and performance of contemporary world/jazz vocal repertoire that is performed by vocal ensembles around the globe. These women have won the hearts of audiences in over 13 different countries and inspired a generation of singers.

They specialise in South Indian vocal percussion, poetic lyrics and skin tight harmonies, with spectacular vocal breaks and trademark Coco's Lunch grooves. Their acclaimed new album 'Misra Chappu' scored in the Top 10 of the Transglobal Music Charts, and has received a host of awards, nominations and praise internationally.

With many Aria award nominations, eight critically acclaimed recordings , vocal ensemble Coco’s Lunch is in the top echelon of A Capella groups in the world. Founder Lisa Young’s vast and deep knowledge of Indian music has brought an uncommon if not unique dimension to the group. All in the group are first  rate singers of jazz, but typical of many of today’s finest artists they are not confined to a genre. Rather, they ‘embrace the world.’ The result is an astonishing, joyful and creative sound that has taken a special place in music, in Australia and elsewhere. Phillip Adams (ABC, RN described the quartet as “inordinately, preposterously, almost slanderously talented.  Curator Tony Gould